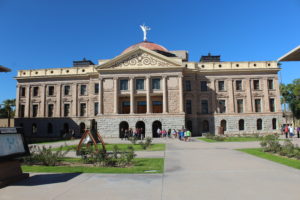 On Wednesday, February 15, 2017, over 150 motorcyclists from all over Arizona converged on the states house in Phoenix to bring attention to motorcycle rights and the need to re-instate the Motorcycle Safety Fund.

There were approx 150-175 riders in attendance representing something like 20+ clubs and organizations. While the majority of the representatives and senators were unable to attend due to a furious committee schedule, I was able to meet and chat with (and grab a quick photo of) 3 representatives and 2 senators.

We greatly appreciate these legislators taking the time to meet with us and we look forward to their support for re-instating the Motorcycle Safety Fund.

PHOTOS CAN BE FOUND HERE!

The complete list of legislators that checked in or sent their representatives to say hello:

If you know of any others that I missed, please let me know in the comments.