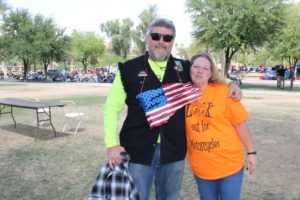 This year’s Motorcycle Day At The Dome was a little different than past years as we were completely surrounded by thousands of teachers, parents and students demanding the legislature provide more money for schools and salaries. But you have to admit, they REALLY know how to protest. You might even say, they “took us to school”!

Sorry for that! But for those of us who are interested in how legislation gets made, and by whom, and most importantly, how it gets influenced, this was an extremely interesting day. With one exception (and unusually avid drummer that didn’t think we had a right to be there) the two groups co-existed very nicely and even had some cross-over as it turns out there were several sport bike (and other) riders in the teachers assembly an they were keen to give us a hand on legislation next year.

However, It seems all the hoopla had a detrimental affect on both the attendance, and staying power of those who did attend, from the motorcycling community as we had the smallest turn out I have ever experienced which DOES NOT HELP OUR CAUSE PEOPLE! It would have been well worth it to attend and see how the teachers do it, because they were (ultimately) HIGHLY effective.

And it was also unfortunate that, with all the protesting and cheering and what not, the Governor decided (the rumor is his security detail would not let him) not to attend our little shindig and instead sent his representative from the Governor’s Office of Highway Safety, and good friend to all riders, Alberto Gutier down to present his proclamation that May was Motorcycle Safety and Awareness Month in the state of Arizona.

About an hour earlier a small group of ABATE of Arizona representatives lead by our Designated Lobbyist, Michael Infanzon and Past President of ABATE of AZ, Mary K Donnay, were recognized in the Gallery by Senator Karen Fann who also read the Governor’s Proclamation into the official record.

And then it seems that even legislator’s need lunch and we actually had a really good turnout of state Senators and Representatives (or their aides) during the short time they had for lunch to drop by, say hello, and, in a few cases, even engage in some debate on the merits of this position or that. But the poor attendance by motorcyclists made it pointless for Senator Steve Farley (from Tuscon are) to address the bikers still remaining (as was the original plan – and I wanted to hear what he had to say) as there were very few of us left tat that point.

Still, those of us who were there eagerly engaged the legislators who showed up, and that was a plus.

But NEXT year, we need a real showing of support or else we may as well hang it up and just let the cage drivers decide how we ride!