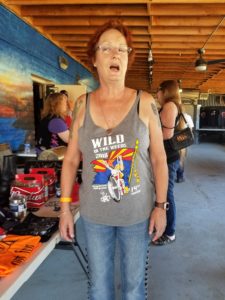 The 14th Annual Wild in the Weeds motorcycle rally, sponsored by High Country Chapter of ABATE of AZ is in the books and it was a fun time. Despite a slightly smaller turn-out than last year the event was a financial and social success and will allow High Country Chapter to meet its obligations and goals for the rest of the year. This year’s event was held at Punkin Center Bar & Grill in Tonto Basin on rout 188 in Arizona.

As usual, the event started on Friday at noon after months of planning and operation to make sure everything needed for a good and safe time was in place. Plum Krazy provided the live entertainment Friday evening with Curtis Taylor, and ABATE High Country Chapter member) filling in for the usual drummer (Rob James) who was out of town on business. The group did not disappoint with there usual mix of classic rock, some blues and a bit of funk and country thrown in for good measure. An over abundance of raffle prizes made sure that the odds were definitely in your favor of winning an awesome prize and several were handed out on Friday.

On Saturday the early risers and new arrivals were treated to a delicious breakfast buffet provided by Punkin Center Bar & Grill by Harley and her team. After breakfast was a chance to hangout and chat with old and new friends while playing horse shoes, a giant Jenga game, or just relaxing until the People and Bike games began around 11 am.

The people games consisted of the favorites, Tire toss for men and women, Plank Walk, Helmet Toss, Pole in the Hole, and Honey I’m Home. Then came the Bike Games. Ride the Plank, Slow Race, and the 2-up competitions of Joust, Road Kill, Weenie Bite and Balloon Toss. The weather was perfect with warm temperatures gently subdued by a nearly perfect breeze. That meant that the weather was also perfect for the final event which was the wet t-shirt contest. The winner of that event went home with a cool $250.

Royce Kincanon (Mr. Music) was the event DJ and Master of Ceremonies on Saturday and Motorcycle Safari once again sponsored the FREE Photo Booth that is always a big hit. This year they were set-up so that you could also get photos of yourself on your bike as well as the usual costumes and general group fun.

The last two events were the drawing of the 50/50 prize ($247 to the winner and the same to the chapter) and the $500 cash prize raffle which was one by a tourist visiting from Minnesota who gladly received the cash the next evening, presented, oddly enough, by last year’s Cash Raffle winners!

After those festivities were over, Mad Mario led Frozen Fire through their paces as the live entertainment for the rest of the evening and the dancing and drinking and general festival like atmosphere continued until about midnight.

Sunday morning was another breakfast buffet as the rally goers were packing up to head home.

High Country Chapter of ABATE of AZ wants to sincerely thank everyone who attended r supported us with donations and sponsorship and hope to see everyone return (bring your friends) next year for an even bigger 3 day party.

Go Here For more photos of the event. 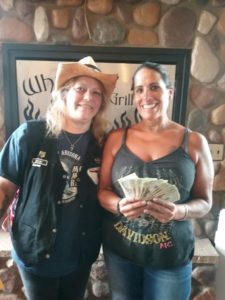