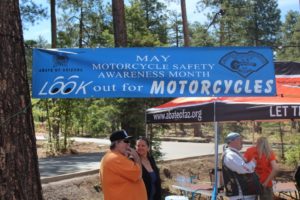 On Saturday, May 26th during the start of the 2018 Memorial Day Weekend, members of both High Country Chapter of ABATE of AZ and Rim Country District of MMMA of AZ joined forces to man a Motorcycle Safety and Awareness booth at the Mogollon Rim Visitor Center on state route 260 in Arizona. Armed with 30 dozen donuts, 2 coffee urns that never stopped making coffee, several cases of bottled water and coolers with ice, and more than enough balloons for the kids, the two groups set out to inform the public about the need to Look Twice for Motorcycles!

Besides the yummy treats and coffee for the adults, there were many take-away items to remind everyone of the need to be mindful that there are motorcycles sharing the road on this first holiday of the summer season. The most popular were the coolies to keep your drinks chilly, the coloring books for the kids (the balloons of course) and the emery boards and pocket mirrors.

The morning started out a but slower that last year due to the many forest closures and red flag fire conditions, but after saying hello to some return visitors from last year … a whole wedding party showed up! It turns out many of them were in dire need of both coffee and donuts and every member of the party, bride and groom included, left knowing more about the dangers of not looking twice for motorcycles. A few even found out how to contact AMSAF to obtain one of their scholarships to learn how to ride safely, and endorsed.

Before leaving we gave a few dozen of the left over donuts to the staff managing the visitor center and a few more to the wedding and packed up leaving the place cleaner than when we arrived.

All in all we met with approximately 150+ plus members of the traveling public and all left better educated about motorcycles and happy with smiles and in many cases smudges of chocolate donuts on their face.

Can’t wait to do it again next year.

Motorcycle Safari would like to than both High Country ABATE and Rim Country MMA for putting on this extremely important annual event.

PHOTOS FROM THE EVENT CAN BE FOUND HERE

Thanks also to the Black Mesa Ranger District of the Apache Sitgreaves National Forest for their awesome support and cooperation.