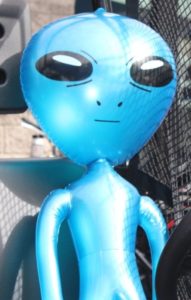 For me, the Alien Abduction Tour put on by the AZ Rat Pack is the most fun I have on a motorcycle all year. This year started like the last year with me riding down to Scottsdale Thursday evening from the mountains 2 hours north of the city. But after a good night’s sleep I was ready to go.

SEE PHOTOS FROM THE RIDE  HERE

This annual ride starts from Go AZ Motorcycles in Scottsdale, AZ. The riders all met about 9 am to complete paperwork, get a last cup of coffee in, and meet old and new friends. I was pleased to run into several people I had ridden with the previous year including my friends form the Southern California Motorcycle Association (SCMA). We also had riders from Northern California, Calgary Canada, and one young lady from Alaska!

After completing the obligatory paperwork, a pre-ride briefing, and a few group photos, we mounted up and 35+ riders headed out for Show Low AZ for lunch and a gas stop.

The ride up AZ route 87 was awesome as there was not much traffic on a Friday morning and the temperature was about perfect for riding. Passing through Payson we picked up a couple of additional riders and headed up “The Rim”  for Show Low. The rim is actually the edge of the Colorado plateau and while it looks like mountains, is really fairly flat on top with just rolling hills between the edge of the rim and Show Low which lies at the foot of the White Mountains.

After a delicious and surprisingly fast lunch at “The House” in Show Low, it was back in the saddle for the run to Socorro, New Mexico. Several riders had skipped the lunch break hoping to make it to the Very Large Array (a misnomer – it should be called the Freakishly Huge Array!) outside Magdalena, NM. These huge antennas are on rail road tracks shaped like an enormous “Y” so they can all be configured perfectly to focus their electronic ears on whatever part of the distant galaxy is being observed at the time. When the main group arrived the visitor center had already closed (New Mexico being in a time zone an hour ahead of Arizona). However, you could still enter and pick up brochures and look around a bit.

From the VLA it was off to Socorro, NM which was clearly anticipating the next day’s activities at the Trinity Site as hotels were full and a local police officer was controlling traffic at the northern entrance to the city from Interstate 25. After checking into the hotel room I had been clever enough to book the day after this year’s tour had been listed online, it was a short walk to Socorro Springs for dinner with everyone who had made the days ride.

Dinner was great with “most” everyone at a big table. Friday night is also 50/50 night and this year there was a $300 pot to be divided. The winner was Woody (yes, yours truly)! How about that!

The second day started REALLY early at 6 AM New Mexico time (5 AM if you were still on AZ time like my body was). The early start was necessary and turned out to be awesome planning as you will see later. Day 2 had three objectives. The first was to get to the Trinity Site, where the detonation of the world’s first nuclear weapon took place. The second objective was to leave by 10 for the International UFO Museum in Roswell, NM. And the third objective was to end up in Las Cruces NM for the evening (although a few brave souls broke off for a side trip to Carlsbad, NM).

Meeting at the Econo Lodge in Socorro for a scheduled departure at 6 AM, I think most of us were a bit surprised that it was not only still pitch black, but also quite crisp, temperature wise. Luckily it was only a 30 minute ride to get in line for the front gates of the Trinity Site at the northern end of  the White Sands Missile Range to open at 8 AM. It was necessary to get here early as we had quite a day of riding ahead of us and since the site is only open 2 days a year the line to get in can get quite long. Luckily, the security personnel at White Sands have been through this rodeo before and entry and the 12+ mile ride to the actual site could not have been smoother. They even knew exactly where they were going to park all of our motorcycles when we got there which we greatly appreciated. After a tour of an amazing location from the entire world’s history (be sure to check out the photos), we prepared for a 10 am take off to Roswell.

I understand there was some excitement for some on the road to Roswell as a Gold Wing Rider experienced a flat tire that pretty much ruined the rest of his trip. Several riders tried to assist, but the tire would not cooperate and eventually the bike had to be towed. The group I was in made a wrong turn and ended up adding about 80 miles and another 90 minutes to our trip to Roswell, but we arrived in plenty of time to end up having lunch with a group of riders (most of whom were determined to visit Carlsbad Caverns) and, since I had won the 50/50 the night before, I was able to treat the whole group. We even had time to tour the UFO Museum (pretty much what you might expect I think) and get a few souvenirs.

After the group headed for Carlsbad left, there were just 5 riders left in our group and, despite the late hour, we determined we were going to stick to the planned route so we could take a ride through Cloudcroft, NM. This turned out to be a fun and very scenic ride (peak elevation for the entire trip at 8,650 feet), but costly for one member of our group who was accused of speeding (we don’t think she was) and received a rather unrealistic fine. The upside was, according to some locals, the average fine in that area is about twice what she received so, at least there was that.

Once through Cloudcroft, the next goal was to try and get to our hotel rooms in Las Cruces, NM before it became dark (or at least pitch black). While we all arrived safely, thanks to GPS and despite high winds crossing the southern end of the 3,200 square mile White Sands Missile Range, it had been pitch black for about 45 minutes by the time we arrived at our hotel rooms (somewhere around 8:30pm).

The plan then was to go to dinner (I don’t even know where that was – some Winery I think) but, while a few riders headed there in case the main group was still there, the rest of us headed for our rooms and I called Dominoes Pizza who rescued me with a piping hot pepperoni pizza and some fresh, hot, cinnamon twists. I was able to convince a fellow rider (Thanks George) to help me “not waste food” and then turned in for the night.

The days total ride (including a wrong turn) came to 475 miles (I’m told … it seemed longer).

There was a plan for day 3 that included an hour north on I-25 then turning west to take back roads through the White Mountains to Safford, AZ for lunch. I don’t know if anyone did that part of the ride our not as we had a group in Carlsbad, another group from southern California that needed to get home, and a few others that were just ready to head back to Phoenix by the fastest route possible (which happened to be Interstate 10).

For some reason, I had a feeling that I needed to get home, to northern AZ, by a faster route than through the White Mountains and my good friend George, who really wanted to stick to the planned route, decided he would stick with me instead. We did 2 hours west down Interstate 10, then turned off onto some of the best roads I have been on in Arizona. On the way we met up with another group headed the same way (and a third group that had stop to visit “The Thing” exhibit along the highway passed us along the way), but eventually George and I ended up heading from Safford to Globe by ourselves.

The last part of the trip was equally gorgeous although quite hurried as I received some news on that road that a family member was being rushed to hospital (it turned out to be a false alarm thank God). Was that the reason I wanted to go the shorter route?  No idea, but I was certainly glad to get back to my mountain town with everyone safe and sound.

I certainly hope everyone else had an enjoyable and SAFE ride home and I really can’t wait to do it all again next year.