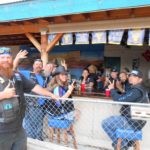 This yearâ€™s Wild in the Weeds old school motorcycle rally was held on May 5th, 6th and 7th (the first weekend in May is its permanent date) at the Punkin Center Bar & Grill in Tonto Basin, Arizona. The event, hosted by the High Country Chapter of ABATE of AZ kicks off the summer riding season in the high country where riders from the Valley of the Sun head during those steamier months to enjoy cool riding on great roads.

The event started on Friday around noon time with the first of the campers arriving for the best spots for tent and RVâ€™s alike. The High Country Chapter had their brand new 10×20 pop-up tent set-up with merchandise, raffle and 50/50 tickets as well as sign-up forms for the people and bike games that would follow on Saturday. For most of the afternoon as attendees started to file in, camaraderie and cold beer were the main staples until the live music started. Frozen Fire, the band for Friday night, did not disappoint starting at 7 pm and leaving after midnight having thoroughly entertained those lucky enough to get away early on Friday to attend. 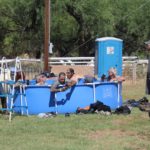 Saturday started with Harleyâ€™s famous breakfast buffet and quite a few Bloody Marys. Harley, the manager of the Punkin Center Bar, had new chefs in the kitchen this year and food had definitely improved over past events. The breakfast buffet was well-attended despite the numerous sleepy heads and hangovers. The food was great all weekend including the lunch buffet on Saturday and a different breakfast selection Sunday morning. The authorâ€™s personal favorite was the dinner buffet Saturday evening as the BBQ chicken was totally awesome. We enjoyed that immensely as Plum Krazy, the band for Saturday evening, rocked us from the patio.

After breakfast was the poker walk among the various vendors in attendance. Thanks to Wolfskin Tattoo, Discount Biker Supply, Coyote Rose, Xen with Richard Lesterâ€™s Law Firmâ€™s Aid to Injured Motorcyclists (AIM), Rim Country District of the Modified Motorcycle Association of Arizona, and SOS House for their support. 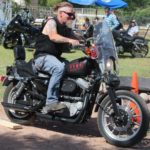 At about 11 am Royce Kincanon, the same DJ/MC as 2016â€™s event, arrived with his music system and the ever popular Photo Booth, sponsored by MotorcycleSafari.com. Royce entertained us with rocking tunes and doubled as MC during both the people and bike games that followed.

A nice treat was the arrival of about 25 bikers from Chop Town that were camping that weekend up in Tonto Village (Choppertown.com). Their presence with some really old school hand-built choppers, including stretched forks, hardtails and suicide shifters, added some real challenge to the bike games.

Visits to the photo booth, tattoo parlor on wheels, vendors and even an amazing game of Giant Jenga were enjoyed when not involved in a people or bike games. However this yearâ€™s most popular spot became the pool that had been used the night before for an impromptu Belly Flop Contest by the Payson Chapter of the Old Bastards MC. Iâ€™m not sure who won that contest, but the pool was certainly well used over the course of the weekend culminating with substituting for the stage during the Wet T-Shirt Contest (Congratulations, Courtney).

And speaking of winners; congratulations to Nolan Steed who won the $500 cash raffle and Joy Opie who won the 50/50 ($275) as well as all the raffle prizes and poker walk winners. Your support is greatly appreciated. 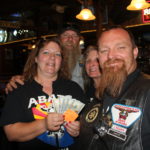 Next yearâ€™s event, the 14th Annual, will also be at Punkin Center and the dates for 2018 are May 4, 5 and 6. Donâ€™t forget to mark your calendar and make reservations now as area rooms sell out fast and well in advance of each event. Also, there will be some Cinco de Mayo surprises planned and designated driver(s) will be on-hand to get you to local motels should you over imbibe.

Thanks to everyone who turned out for this fun event. We canâ€™t wait to see you again next year!

Visit WildInTheWeeds.com for information about the next event as well as photos and videos from past events.