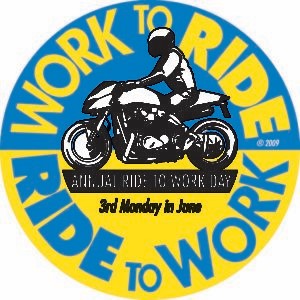 WASHINGTON, DC – Today marks the 26th anniversary of “Ride to Work Day,” an annual national event that promotes the motorcycle as viable alternative for commuting to work.

In many areas of the country, increased traffic and parking congestion problems are accompanied by deteriorating roads due to higher-than-ever numbers of cars on the road simply used for commuting short distances. For those who ride, using your motorcycle as an alternative to commute can help to alleviate traffic and congestion problems as well instill other public benefits.

According to the United States Census Bureau and the Department of Transportation, over eighty million cars and light trucks are used every day for commuting, and only about 200,000 motorcycles and scooters are a regular part of this mix. Additional data suggests that traveling by motorcycle can shorten journey times by as much as 33 minutes of every hour for city travel. This is in addition to more parking options, fuel savings and the undeniable advantage of enjoying the environment and your surroundings.

This year’s Ride to Work event recognizes our nation’s road warriors and sends a strong and united message that riding is a socially beneficial form of transportation which provides a broad range of other public benefits. Internationally this exercise is also gaining traction with dedicated Ride to Work Days in Russia, Turkey Puerto Rico, Mexico, Israel, Hungary, Great Britain, Germany, France, Ecuador, Canada and Brazil

Here in the U.S. cities can show their support by issuing proclamations stating the benefits of riding to work and encouraging motorcycles as a form of daily transportation. At the time of writing, this year’s cities include:

Since 1992, this event has been organized by the Ride to Work organization in an effort to increase public awareness of motorcyclists; promote the use of motorcycles as a method of transportation; and increase motorcycle safety.

About Motorcycle Riders Foundation
The Motorcycle Riders Foundation (MRF) provides leadership at the federal level for states’ motorcyclists’ rights organizations as well as motorcycle clubs and individual riders. The MRF is chiefly concerned with issues at the national and international levels that impact the freedom and safety of American street motorcyclists. The MRF is committed to being a national advocate for the advancement of motorcycling and its associated lifestyle and works in conjunction with its partners to help educate elected officials and policymakers in Washington and beyond.