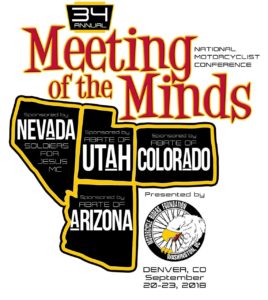 This year we had an opportunity to do something we have wanted to do for awhile now and that was attend the Motorcycle Riders Foundation (MRF) annual conference. This year it was being held in Denver Colorado and was sponsored by Nevada Soldiers for Jesus MC, ABATE of Utah, ABATE of Colorado, and ABATE of Arizona. Being a relatively easy (we thought) 2 day ride to Denver, several members of Arizona’s contingent decided to ride as a group.

A group of 6 riders on 5 bikes met in Payson, AZ early on Wednesday, Sep. 19 for the first leg of the trip to Santa Fe, NM. We had Dawn and Nolan Steed, Mary Kay Donnay, Lee Thompson and Woody Phillips and CC Ransom. The weather was cool and threatening rain, but being a weekday in northern AZ meant light traffic and the lack of direct sun meant we were not melting as we climbed up onto the Colorado Plateau (The Rim for locals) and started across the high plains. After a quick fuel stop in Holbrook, AZ, we turned east onto Interstate 40 headed for I-25 in Albuquerque, NM. About 30 miles outside of Gallup, NM one of the bikes started experiencing an odd electrical problem. A quick check of the bike did not find anything wrong so after a great lunch in Gallup, we continued east on I-40. Unfortunately, the same bike started to exhibit similar problems as we neared our next gas stop in Grants, NM. Not wanting to take chances we exited in Milan, NM at a large truck stop and the only trained mechanic in the group, Nolan Steed, proceeded to begin troubleshooting. It did not take long to decide the problem was a battery that had probably suffered an injury during a recent run-in with some children that had knocked the bike over. The theory being that the constant vibrations had made the problem worse, Nolan quickly made a trip to the next exit, where there were several automotive parts stores, in seek of the right size battery. The whole delay was less than 2 hours but no one seemed to mind with plenty of snacks, drinks, large clean washrooms, etc. available. Thank you LOVES’s truck stops for providing great facilities.

Back on the road again, it was only a short time before the ominous looking clouds on the horizon prompted another pull-over to don our rain gear that luckily everyone had the foresight to pack. Sure enough, just a few more miles down the road we were riding in some significant rain. The need for gas and the desire to get off the freeway during some very close lightning, gave everyone a chance to make sure their packs were squared away and all gear was working as desired.  After waiting for the lightning to pass us, we headed back out onto I-40 in significant rain. Unfortunately, all the delays now meant we would be traveling I-25 from Albuquerque to Santa Fe in the dark. That was also the direction the storms were headed, so we all steeled ourselves that we would arrive, wet, tired and a somewhat cold (although thank heavens it was not as cold as it easily could have been).

When we arrived at our hotel in Santa Fe, late, wet and tired, another contingent of ABATE of AZ that was traveling in a rented van had already arrived and were anxiously awaiting our arrival. Once we were all checked in and had a chance to make sure we were wearing dry clothes, we headed to the nearest restaurant (a Denny’s across the street) where MotorcycleSafari.com bought everyone a nice hot dinner. Then it was back to the rooms and off to bed to get a good night’s sleep before an early departure shortly after sunrise the next morning.

Morning brought cool clear air, still damp but not many clouds so we were all hopeful as we took advantage of the hotel’s hot breakfast and began packing gear for the ride to Denver. Unfortunately, by the time everyone was ready to leave, it was raining again, although not nearly as heavily as the previous evening. Just before our second gas stop and shortly after crossing into Colorado, the clouds thinned, it stopped raining and before long the sun was out. This was a welcome relief as the traffic, and the need to concentrate more, became much worse once we approached Colorado Springs. From there to Denver was a fairly easy ride made more so by the decision to take the toll road across Denver and only spending a short period of time on I-70 before arriving at the hotel where the conference was being held. We arrived pretty much exactly when we had wanted in the middle of the afternoon which gave us all time to get to our rooms, change, and drop by conference registration before the first event began. (Click here to view a copy of the agenda). Once the opening meeting concluded, it was time to either hit the hospitality suite, or a restaurant in search of dinner. Then, off to bed for full day of meetings and activities.

Mike Infanzon, Legislative Director for ABATE of AZ presents at the opening meeting of MOTM 2018

Friday brought a wealth of information in the morning followed by a couple of important working sessions in the afternoon. The SMRO Legislative Planning/Strategy Meeting, where the MRF legislative agenda for 2019 is laid out and voted on by the 43 states represented, and the Executive Directors Town Hall were of most interest to the author and were both insightful and productive. After the first full day, the entire ABATE contingent went to a local BBQ house for dinner where we mostly ended up talking about the days events, what we learned, and how we could use that information going forward back in AZ.

Saturday’s activities were well planned and afforded ample opportunities to meet with and chat to motorcyclists from across the country to see what was and was not working for them in the areas of legislation, awareness and safety training, membership drives, and a host of other subjects of interest to everyone who was attending. The only disappointment of the entire event was the cancellation of a planned talk by David “Double D” Devereaux of the Motorcycle Profiling Project. I would have loved to have heard an update as Double D is a great speaker and both highly knowledgeable and very passionate about the subject of Motorcycle Profiling. The end of the day concluded with the annual banquet which is where the MRF is able to present the majority of it’s awards and culminates in a silent, and not so silent, auction fundraiser (CC really likes the new jacket I won) as well as the presentation of checks by sustaining members. This is where the MRF retrieves the majority of its funds to keep it’s office in Washington D.C. going on behalf of the nations motorcyclists. During the presentation of awards, Arizona’s own “Still” Ray Fitzgerald was inducted into the MRF Hall of Fame and this honor was definitely well deserved!

Sunday morning ended the activities with a blessing of the bikes. However we had a long ride ahead of us and were already saddling up when that was going on and after a quick fuel stop, we were on our way west out of Denver on I-70. Passing through 10,662 feet altitude on our way to our first fuel stop in Vail, CO we started seeing wild bison on the high pastures, as well as the first autumn colors in the millions of aspen we passed by. The scenery coming out of Denver on our way west was simply amazing and with no hint of rain the only issue was the cold at altitude. However, by mid-day we were in Grand Junction, CO where it was time to shed some gear and start enjoying the warmer, sunny skies.

After a lunch stop in Grand Junction, it was decided we would take the “back way” into Moab, UT so we could pass through a truly gorgeous canyon on our way to our dinner stop. This was a very unusual road but proved to be worth the extra 15-20 minutes it added to the trip as was attested to by everyone in the group despite the desire to get off the bikes ASAP upon entering Moab.

In Moab, the first place we saw to stop was a Denny’s so we did. However, let me warn everyone right now that this is the worst Denny’s on the planet. They were out of, or did not know how to prepare, about half the menu. The staff was very attentive and kept apologizing, but almost no one got what they wanted. I never do this, but DO NOT STOP at the Denny’s in Moab. It was stunningly bad.

After almost having dinner, we decided to just get to our next hotel in Blanding, UT as it was now getting late. Despite being just over an hour away, this seemed like the longest segment of the entire trip as it was turning dark, ended up getting very cold, requiring a stop on the side of the road to dress up for cold weather, and we were passing through a deer migration area and even had to dodge a large doe as we passed through Monticello, UT.

In Blanding, virtually the entire town had already closed so there was nothing for it except to get to bed so we could hit the road at sunrise in the morning.

Monday morning was cool but glorious. I think everyone was in a hurry both to get home and to pass through Monument Valley on the way. The scenery coming into Bluff, and Mexican Hat, UT is spectacular. But even that was completely surpassed as we crossed the first ridge and Monument Valley loomed into sight. This required two stops for photos (see the attached photo album of the trip).

After Monument Valley we had a quick stop for gas in Kayenta, AZ and then headed to Flagstaff. Along the way we saw rain in the distance, and even passed through a couple of spots where it had recently rained, but that was the last of rain until after we arrived home. In Flagstaff we had our last lunch together as a group before the Phoenix riders split off leaving Woody, CC and Lee to head down Lake Mary Road toward home.

Next year, Meeting of the Minds is in Minneapolis. Anyone up for a road trip?

View  a Power Point Presentation on the THE PUBLIC BURDEN ARGUMENT that was presented at the conference by Matt Danielson of the Motorcycle Law Group! 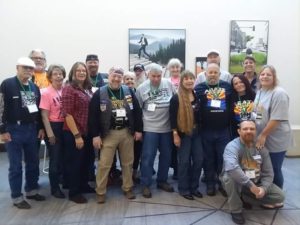