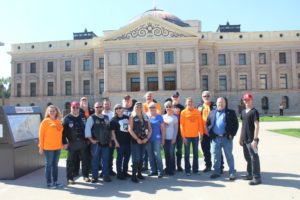 The 2020 Motorcycle Day at the Dome is an annual event sponsored by ABATE of Arizona, the Arizona Confederation of Motorcycle Clubs and the Modified Motorcycle Association of Arizona (MMA). While this year’s turn-out was not quite as large as the previous year, there were still a large number of clubs and independent riders. Enough so that when all the bikes fired up their engines just after noon, the racket was certainly heard inside both the State Senate and State House of Representatives offices.

This annual event gave us a chance to meet with many Senators and Representatives to educate them about the need for the bills we are backing in the 2020 session.

Unfortunately, it appears we did not have enough support to push the Lane Filtering bill onto the docket, so next year, let’s show up with a thousand motorcycles and really get their attention.

We were happy to be supported by several Law Firms and the Arizona Motorcycle Safety and Awareness Foundation (AMSAF).

Also in attendance was Director Alberto Gutier of the Arizona Governor’s Office of Highway Safety. We were happy congratulate the Director on the seried of television ads his office is currently running to promote Motorcycle Awareness to the public at large.

PHOTOS OF THE EVENT CAN BE FOUND HERE!