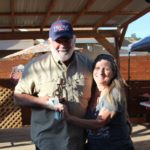 On Saturday, October 19th, 2019 the High Country Chapter of ABATE of AZ held its 14th Annual Chill Cook-Off fundraiser. The event was held that the Tonto Rim Bar & Grill in Star Valley, AZ and the finds raised will be used to offset expenses for the 17th annual Barbie Hensler Memorial Toy Run on Dec 14th, 2019 at The Buffalo Bar & Grill in Payson, AZ.

High Country does this fundraiser each year because every penny raised at, and all contributions collected during, the Toy Run are donated to local families in need at Christmas time.

As in past years, Hans Olson was the live entertainment. Mr. Olson is an Arizona Blues Hall of Fame inductee and is widely known throughout Arizona. He recently played a concert for enthusiastic fans at The Musical Instrument Museum in Phoenix, but this day, his fans heard him for FREE! You can read more about Hans Olson by visiting his web site: http://www.hansolson.net/

The event started at Noon with judging of the chili beginning at 12:30 PM. After judging was completed, anyone who paid a single $5 bill was able to eat their fill and boy did they! I guess all of the chili was very good as there was hardly a taste left when it was all over.

While all the eating and dancing an amazing music was going on, ABATE of Arizona Sergeant at Arms, Cheyenne Kid, was busy selling 50/50 and raffle tickets. He did a good job too because just after we announced the winner of the cook-off, we handed out more than $240 to the winner.

Raffle prizes consisted of gift certificates, t-shirts and various merchandise. There was also a silent auction that kept bidding going right up until the clock ran out.

The winning chili was brought by Gordon Tibbetts who one $200 cash and a great looking trophy. Mr. Tibbetts then wowed the crowd by making the first cash donation, all $200, to Barbies Toy Run! We cannot thank Mr. Tibbetts enough. Pleas come back next year to defend your trophy!

Photos of the event can be found here!