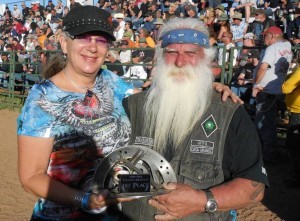 MK with Muskrat, TOO BROKE FOR STURGIS 2014 M.V.P. Award Recipient

Steve â€œMuskratâ€ Musgrave was born May 22nd, 1951 and passed away unexpectedly of a heart attack August 9th, 2015, at age 64.Â  He was our friend, brother and a fellow A.B.A.T.E. of Arizona member since April 1996.Â  Muskrat endured many ailments and issues, but hardly ever complained about them.Â  He accepted whatever came his way, and tried to make the best of every situation with a positive attitude and beefy smile.Â  I couldnâ€™t believe how fast he recovered from two knee replacements and two hip replacements. Â He couldnâ€™t wait to get back on his motorcycle and grin in the wind. Â Then he had a bad leg break that healed wrong and endured even more pain and multiple surgeries to correct that and save his leg.Â  Â Every time he had a medical procedure, heâ€™d get back up and going about his business, helping fellow bikers, a.s.a.p.Â  Heâ€™d just gotten his leg cast off, and was really happy he finally had a straight leg again, despite a newly fused ankle, before he passed away.

Having known Muskrat personally for about 15 years, I recall his being a member of Bikers of the Third Wheel, Modified Motorcycle Assoc. of AZ, Desert Thunder MC Treasurer, then Hooliganâ€™s MC Casa Grande Treasurer.Â  Muskrat was the National Coalition of Motorcyclists (NCOM) Region 9 Director and on NCOMâ€™s Board of Directors.Â  He worked diligently to represent Aid to Injured Motorcyclists (AIM) attorneys Joe Eggelston and Richard Lester for 10+ years at a wide variety of motorcycle events and ACMC meetings.Â  Muskrat attended countless NCOM and other motorcycle rights seminars and events across the country.Â  That was his life blood.Â  He was a motorcycle rights lobbyist before I ever knew they existed, and helped pass several key legislative bills here in AZ.Â  Sky Pilot credits Muskrat for educating and encouraging him to become a lobbyist too.Â  Muskrat wrote really good, comprehensive articles to relay his education and experiences to other bikers in various publications.

Muskrat volunteered countless hours to A.B.A.T.E. of Arizonaâ€™s success by being our vendor coordinator for TOO BROKE FOR STURGIS for the past 14+ years.Â  I presented him with an M.V.P. award last year at TBFS 2014.Â  He cried when I gave him the award and said heâ€™d always cherish the custom trophy.Â  This year, he told me that â€œTBFS just keeps getting better every year, but this was the best one yetâ€.Â  Maybe because he won the new contest, The Menâ€™s Most Fantastic Facial Hair, â€œBest Free-Styleâ€ competition.Â  He was so proud.Â  He had showered and used a cologne just before the contest, and asked the lady judges to â€œsmell my beard!â€ Â I want to remember him that way, proud as hell.

Iâ€™m still numb, and will miss my brother Muskrat for a long time to come.

With love and respect,