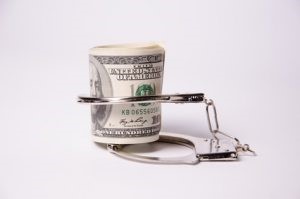 A motorcyclist who just hit it big at the local casino is riding home with a big smile and an even bigger pile of cash. He is going to able to pay the mortgage, get his kid that expensive birthday present and take his wife out for a fancy dinner. Things are really looking great.

Then it happens. He gets stopped for (fill in the blank). While the officer is running his papers, the cop casually asks him how much cash he has with him. Not knowing where this is headed, our biker answers the question and then is forced to produce the cash. The next thing you know, he is on his way to the local sheriffâ€™s office without his cash or his bike. After a couple of hours it is explained to him that he is free to go, but the police are keeping the cash, and his motorcycle.

The next day our biker goes to see about collecting his property and discovers the property has been seized under suspicion of being related to drug dealing and he will have to go to court, to prove the innocence of his property, if he wants to try and get it back!

At this point I hope you think I am the worldâ€™s worst fiction writer as the story thus far is not believable. The problem however is that this is NOT fiction and you better believe it can happen!

There is a law in this country, the land of the free and the home of the brave with liberty and justice for all, which allows police to seize your property and keep it even if you are never charged with a crime. It is called Civil Forfeiture or more often Civil Asset Forfeiture (or even Civil Asset Seizure). This law has been used since prohibition but has really gained favor in the last few decades as law enforcement agencies have struggled to keep their budgets funded.

There is even a company, Desert Snow, which offers training to police officers on methods to seize assets, particularly on our nationâ€™s highways. Not only does Desert Snow train officers. They also provide them with an information sharing portal, Black Asphalt, so they can coordinate their efforts and have competitions to see who can seize the most contraband. Obviously, many of these efforts are aimed at removing illegal drugs from our communities, but it is the cash grabbing part that is highly suspect. Joe David, the companyâ€™s founder, has even hired himself out to officials in Caddo County, Oklahoma where he was able to collect over $1 million dollars in 6 months from the drivers on the stateâ€™s highways, including I-40, keeping 25% as his part of his fee.

So what we have is a legal method for raking in cash. But these cops are not crooks and the money is not going to them, so where does it go? It turns out that there are slightly different laws in all 50 states, but in ALL states, at least a portion, if not all of the money and money from the sale of property seized (like motorcycles, cars, trucks, boats, even houses) is returned to the department where it was originally seized. The idea is the money can be used for anything the department needs in order to maintain its war on drugs. But it is not illegal, and has in fact been used, to pay for everything from parties to conventions. Bluntly, they can use this money any way they damn well please.

What is even worse about this situation is that it is nearly impossible to fight. Since this is a civil case (rather than criminal) there is no requirement to prove anything beyond a reasonable doubt. In fact, the property, cash, motorcycle, work tools, etc., are considered guilty until proven innocent. And the process of proving that can be lengthy, very expensive and definitely time consuming. So much so that the majority of folks just give up as they have neither the resources nor the ability to fight the system.

So the next time you are pulled over by the police, or stopped at a motorcycle only checkpoint, keep your mouth shut and you money in your pocket.

To read more about this subject, check out these links:

Civil forfeiture in the United States

Until next time, Ride Safe!